U.S.A. UNITED SWISS ARTISTS is an artist collective founded by Christoph Draeger and Martin Frei, going back to a collaboration that started in 1988 when they studied together at Lucerne School of Visual Arts. It received its name in 1994 when it had grown to four members (+Rebecca Schmid and Urs Lehmann) at the occasion of our solo exhibition at the Museum of Fine Arts in Lucerne. When participating in Harald Szeemann’s “Speed” at the 1997 Kwangju Biennial, and our 1999 solo show at Institute of Contemporary Art in Dunauyvaros (Hungary), it was again just the two of us. U.S.A. UNITED SWISS ARTISTS were always dedicated to invent conceptual artworks with humour and irony. These included installations, sculptures, paintings, performances, and videos. Our film “Un Ga Nai-Bad Luck” (40 min, 1995) is in the collection of Kunsthaus Zürich. In 2002 we conceived the interactive public art project “Beaufort 12” for Expo02, at the arteplage in Neuchatel for an audience of approx. 4.5 million visitors.

After Expo02 Draeger and Frei went separate ways: while Draeger continued a successful career as an international artist, Frei focused on being chief designer and founding member of Urwerk, a highly acclaimed watch company in Geneva. In 2021 Draeger and Frei decided to reactivate USA, which led to their inclusion into the Moon gallery’s space project.

Our idea is to bring a transcendental object into orbit to become a representation of the immensity and inconceivability of Space. How could such an object be conceived? Neither a painting nor a sculpture could ever transmit this concept. Or could they? Consider this: A pedestal bearing the inscription “Socle Du Ciel” travels around the Earth and, owing to its continuous state of motion, offers an infinity of perceptions of the universe as a sculptural concept, and thus becomes a symbol of the immensity of Space. This abstract sculpture will also be a just representation of time and space. True, the sculpture cannot be contemplated from our planet, but this is not necessary as its mere existence supplies an artistic and philosophical basis for thought.  The cube will be made by the Swiss watchmakers URWERK from the metal Titanium with laser engraving. Titanium was named after the Titans of the Greek mythology, of whom Atlas, who carries the firmament, was one. We choose Titanium, since the “Socle Du Ciel” is metaphorically taking over the task of carrying the heavens from Atlas.

Back in 1990, we contacted the president of the USA, George Bush, and the chairman of the USSR, Mikael Gorbatshev, with a letter to each, asking them to send an artwork into orbit. For the United States, we proposed a golden frame with the engraving “Cadre de l’Univers” (frame of the universe), while the USSR should put a pedestal with the letters “Socle Du Ciel” (Pedestal of the Sky) into orbit. While referring poetically to Piero Manzoni’s Socle Du Monde, the objects maintained a slight irony of their own: the frame functioned as a symbol for the western value-system of capitalism, while the pedestal could be seen representing materialism, a philosophy central to communism. Back in the days, this project was also meant as a critique of the race by the two superpowers to extend their global supremacy to outer space. To our surprise we weren’t granted a response from either addressee, which led to the inclusion of this updated version of the project 31 year later with the Moon Gallery. 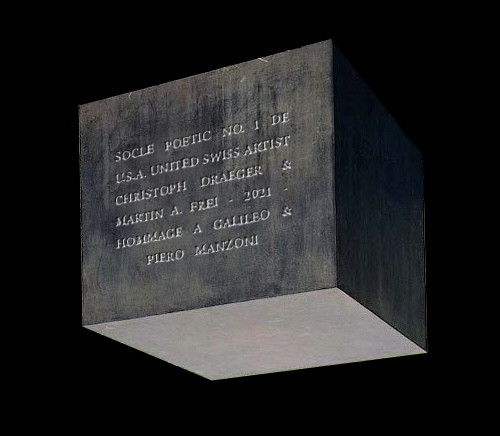 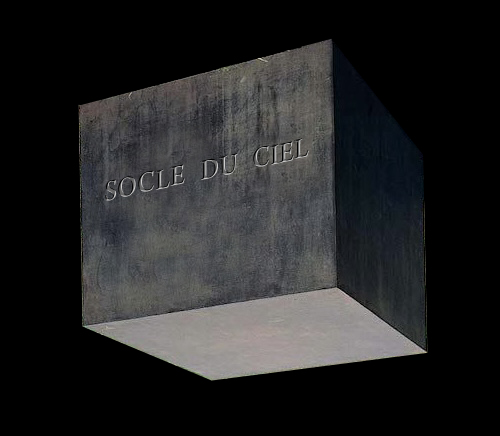