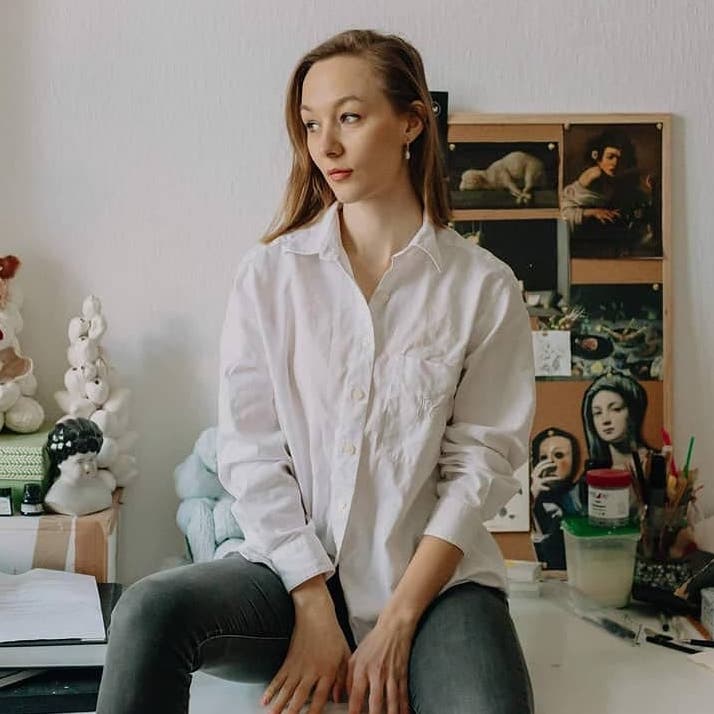 In my works, I examine the beauty and fragility of the natural world. My sculptural language is rooted in classical European traditions of porcelain art, engaging with themes of beauty, biomorphism, and notions of the micro and macrocosm. One of my main ideas is to capture the transformation of ephemeral brittle beauty into petrified porcelain forms that will stay like little eternal monuments of delight and celebration of life. In my artworks I often challenge the viewer to find their own meaning, wake up feelings and emotions, associations and fantasies, which are more covert, carrying some secrets and mysteries. I am creating a private dialogue between an object and the viewer. My sculptures are made mainly of porcelain because of its unexampled and unique qualities as a clay body: its subtlety and fragility. Smooth surface quality refers to something mysterious which intrigues me. This special material is able to give you the sense of texture due to its pure whiteness, astonishing translucence and ability to take on fine details. Although my works focus on nature and the body, they are never figurative and poise geometric abstract matter.

Kristina Okan is an award-nominated international visual artist, born in Russia in 1991.  Lives and works in Berlin and Moscow.

She received her Master of Arts Degree from Stroganov`s Academy of Industrial and Applied Arts in Moscow. She has exhibited her works in solo and group exhibitions across Europe and Asia, including the UK, Italy, Greece, Germany, China. Okan was nominated for a prestigious international ceramic art award “Blanc de Chine” in 2019 and awarded an honorable mention from Cluj Ceramic Biennale. Her works can be found in the collections of Quanzhou Porcelain Road Art Development Center (Beijing)

In 2018 a team of scientists from the NASA confirmed that they had directly observed definitive evidence of water ice on the Moon’s surface, in regions that sunlight never reaches.

This was a huge revelation that will help our understanding of our satellite and it meant that water could be a resource possibly accessible for future expeditions that will leave the Earth to explore and even stay on the Moon. The old dream of colonizing the Moon has become more real. One of the biggest challenges that we face when traveling for long periods of time to space is how to feed the explorers. Sending food to space is the only possibility that we have right now, and it’s a pricey one. The barren scapes that we find in outer space make it practically impossible to grow any food while being out there.

Water on the Moon radically changes this. What we need right now is just a seed. A seed that will use that water and will start spreading, making the Moon a place more welcoming for us humans. A seed is the symbol of the beginning of nature – its conception, its literal starting point. One cannot but marvel to see how, after one plants a seed in the soil, a small stem starts to grow little by little. Give water and sun to a seed, and it will evolve into a majestic vegetable creature. The power of transformation of a seed reaches mythical proportions and they often appear in religious parables.

Nowadays the feeling of awe of watching a growing plant from the seed has been lost, due to our increasingly industrialized culture. We are missing one of our most basic connections to our planet. The discovery of water on the Moon can change that. The whole planet will be watchful and breathless after we plant the first seed on the Moon.

My seed symbolizes that feeling of anticipation and wonder.

Porcelain is a material that comes from soil. A petrified piece of earth fired at over a thousand degrees and transformed into delicate pieces that sustain the passing of time for centuries and even millennia. It has been one of the greatest inventions of mankind since the Stone Age. It is fragile yet permanent. Solid yet delicate.

My seed has been created based on a real lemon seed. It was important for me not to imitate nature, not to create a sculpture with my own hands, but to make a model of a real seed. An untouched creation of nature. I created a casting mold of the seed in which I later poured the liquid porcelain. Then, the model was fired in a kiln, thus creating a perfect representation of the beginning of all vegetable creatures.

The seed, made with Earth’s soil, will fly to the Moon to encounter our satellite’s water reserves, serving as a memento of mankind’s resolution of establishing the next settlement in our voyage through the cosmos.

SEED is a porcelain sculpture, created from a real lemon seed. It symbolizes the feeling of anticipation and wonder. 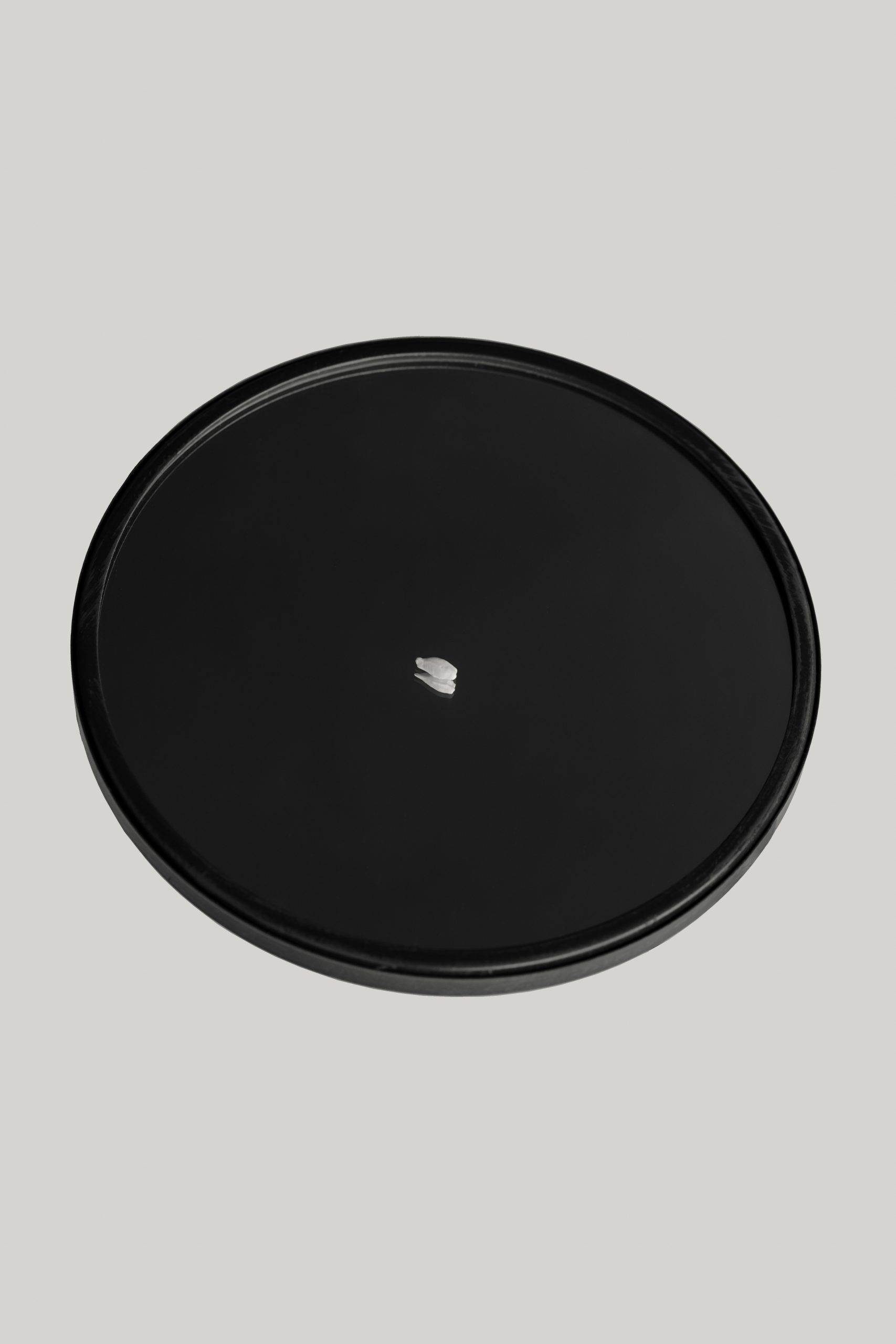 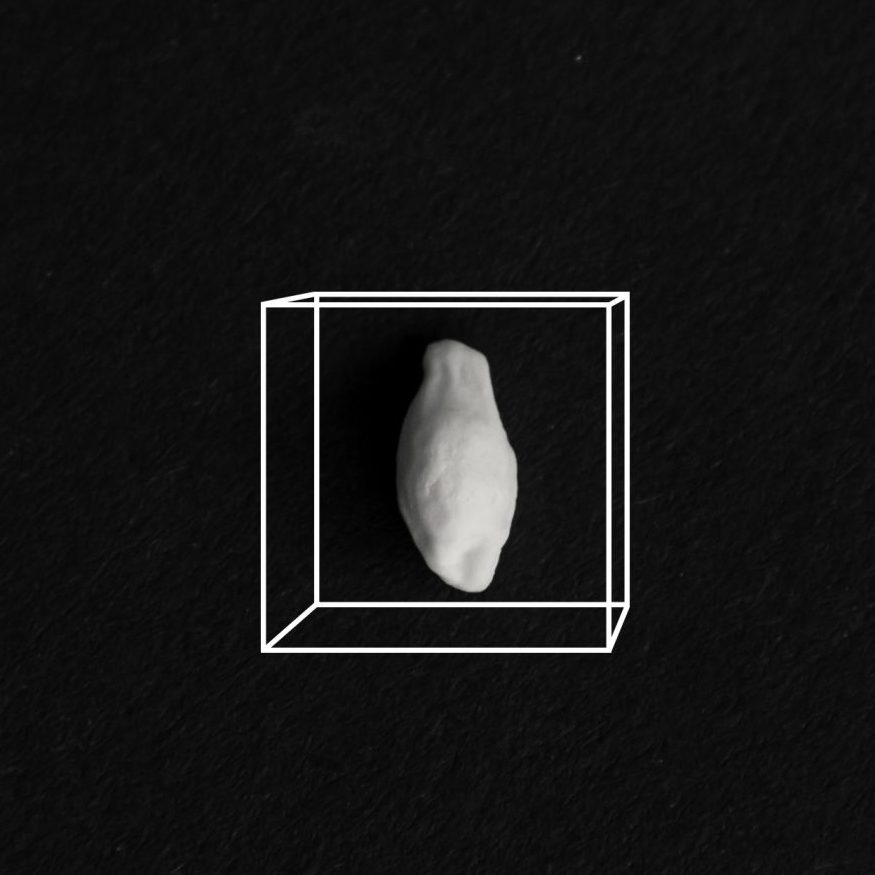