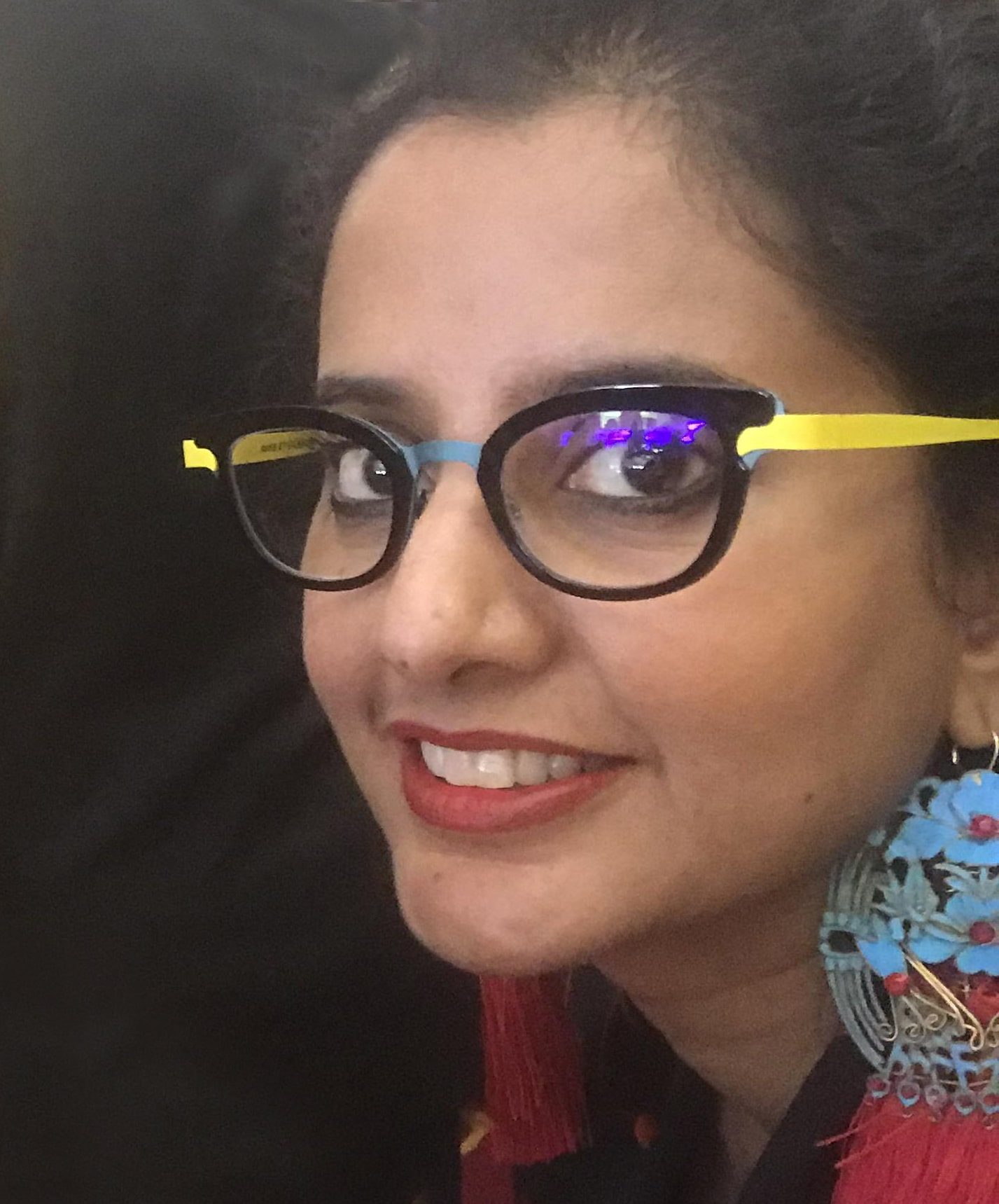 Lakshmi Mohanbabu is a Singaporean artist who grew up in Kabul Afghanistan during the 70’s and 80’s.  She is a trained Architect (B.Arch, Manipal University) and Fashion designer who graduated from the National Institute of Fashion Technology (NIFT) in New Delhi.  Lakshmi has taught fashion design, illustration and design history in various educational institutions including Singapore’s LASALLE College of the Arts and NIFT (India).  She has illustrated books for VHAI (Voluntary Health Association of India) and WHO (World Health Organisation) in the area of disability.

Travel and interaction with people from across the globe with a significant time spent in Europe and the Asia Pacific studying art, architecture, jewellery and design in these regions has enabled her to incorporate cross-cultural elements and philosophies in her works. She views herself as a perpetual student of art and design and her work encompasses a wide range of design fields from painting, architecture, furniture design, sculpture, installations and precious jewellery and has been exhibited in prominent galleries. Her interactions series of paintings was featured on the Suntec screen in Singapore the largest HDTV screen in the world.

To understand our surroundings and the Universe we have created numerous building blocks and methods of analysis; numbers, basic shapes such as the dot, triangle, square and circle as vehicles to explore art, science, religion and life. We have created our own symbols to represent our perceptions, thoughts and interpretations. These symbols and imagery are what I have used in my interpretation of the cube of interaction inspired by the Mandala.

‘Mandala’ comes from the ancient Indian language Sanskrit meaning “Encircled essence”, enclosing a space penetrating a sacred core symbolising the universe, having gates to the four cardinal points, a pattern of existence with us being a part of its intricate design, seen as cosmic intelligence and integration, it represents unity, harmony and cosmic order.

The Taoist Ying and Yang mandala represent the duality of opposition and interdependence with the use of a waveform and complimentary black and white sides.

The Hindu mandala is a microcosm and a macrocosm, a square with four gates within which are intersecting triangles pointing up and down representing the duality of male and female, surrounded by lotus petals alluding to the creation of something new that does not yet exist, with Mount Meru as the axis mundi in the center.

The Buddhist mandala used for meditation with its rich intricate figures and outer circle of fire suggests the impermanence with which the world is suffused and to be always mindful of death.

The Islamic mandala is dominated by geometric shapes in which a segment of the circle, the crescent moon, together with a star, represent the divine. The entire building of the mosque with its interior dome becomes a mandala. The roof represents the arch of the heavens and turns the worshipper’s attention upwards.

The Christian mandala appears in the forms of the Dromenon, Celtic cross, Halo and Rose windows.

The arrow a masculine principle is a solar symbol depicting the sun’s rays and direction, the movement of time. A flight of arrows signifies ascent to the celestial.

The flower a feminine principle  The lotus or the rose is a symbol of creation, new life and beginnings.

Interpretation:
The orange cube represents living fire and energy signifying progress. The cube is divided by a single continuous line starting and ending at the same point representing the idea of continuing life cycles and infinity.

Unity is represented by crosshairs defining the centre, the point of origin and creation.
Duality is represented by the square divided into two sections the positive and the negative.
Trinity is depicted with arrows that are essentially triangles interconnected with channels implying direction and interaction.

The square represents the four directions, the basic foundation for the cube.
The circle is represented with the pattern of radiating arrows, with 12 arrows penetrating and moving inward, the self, and 12 arrows radiating outward reflecting the form of petals in a flower blossom, the creation. 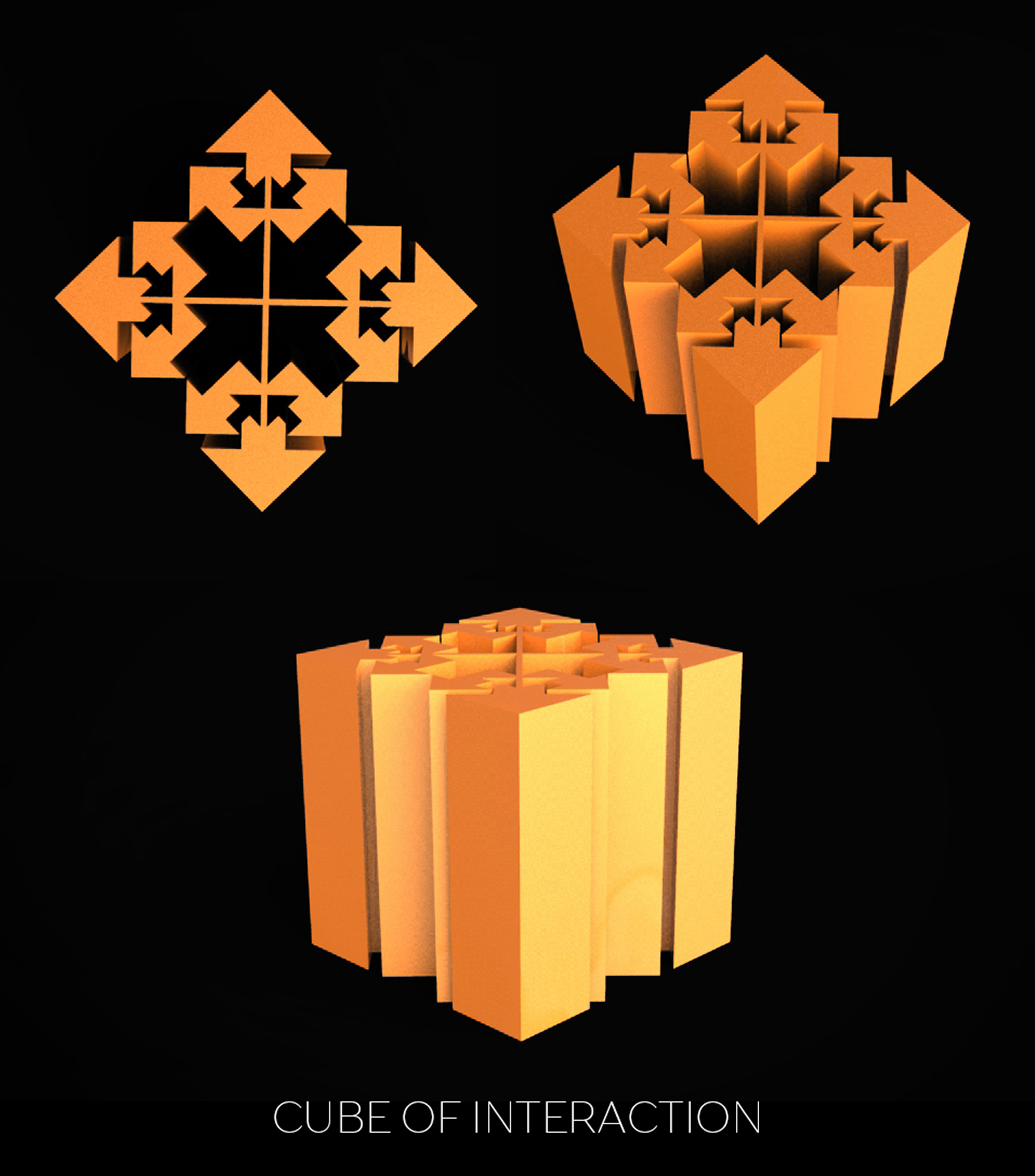 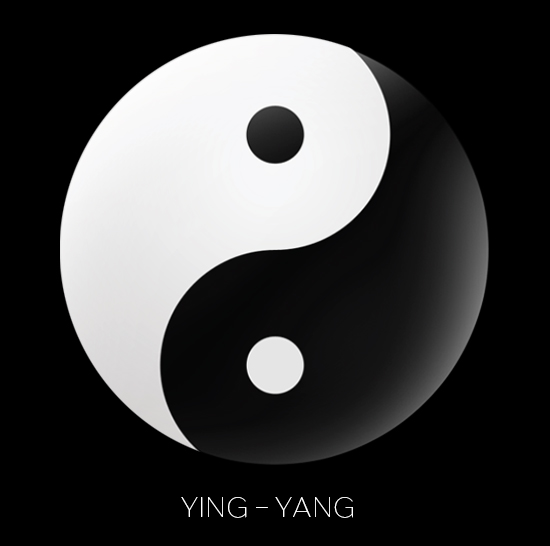 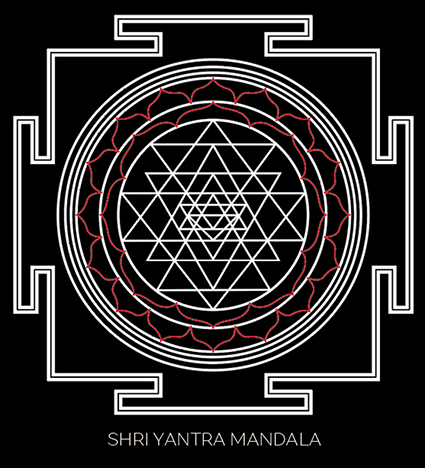 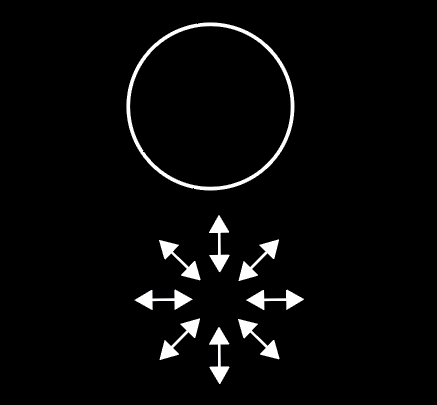 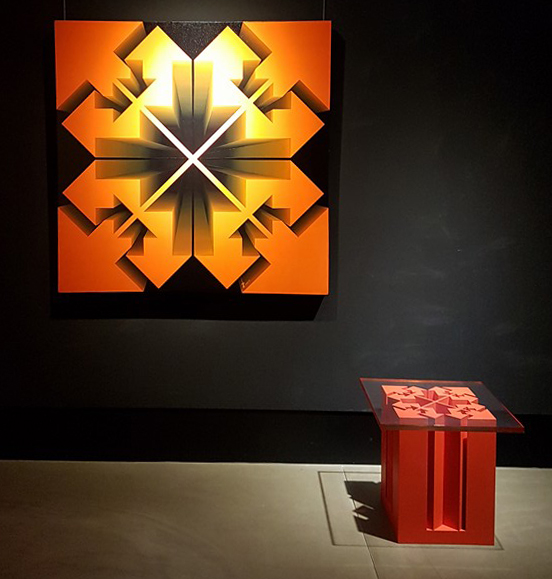 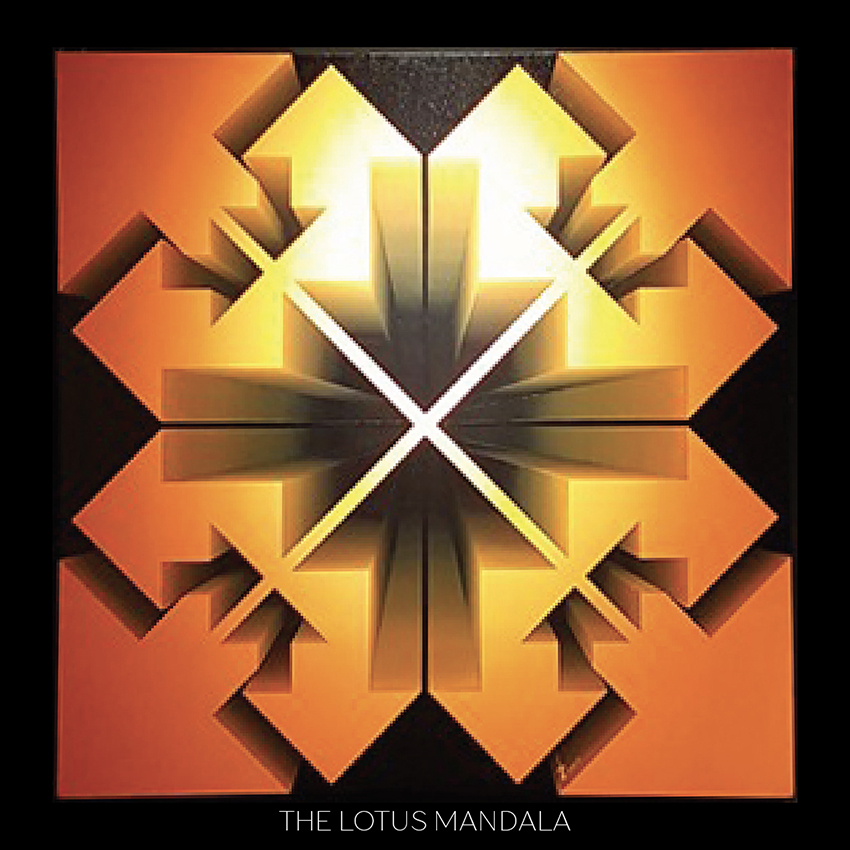 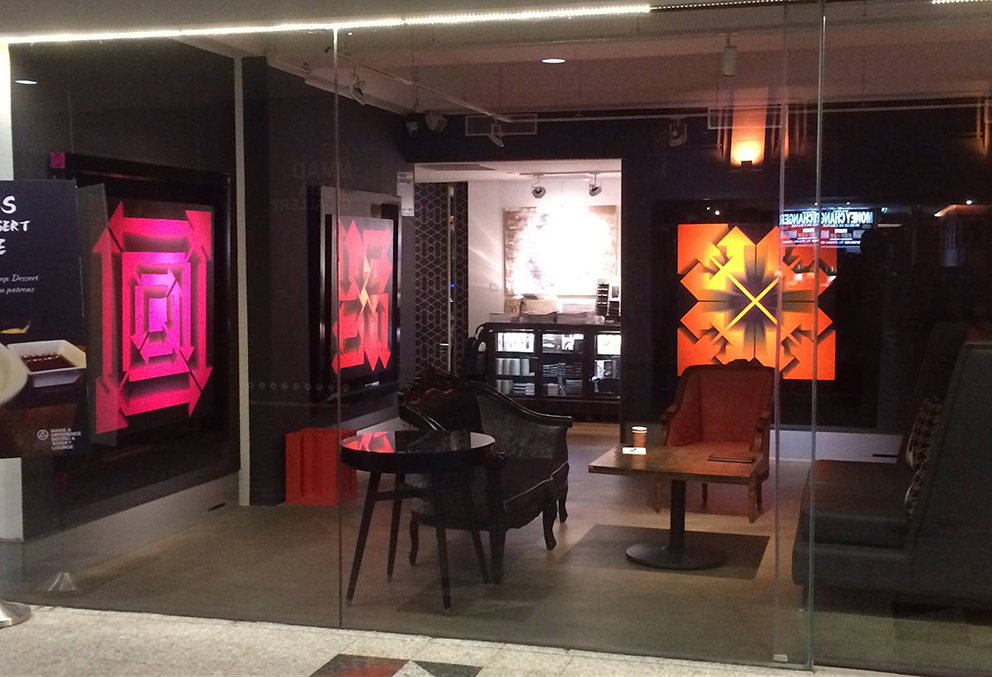 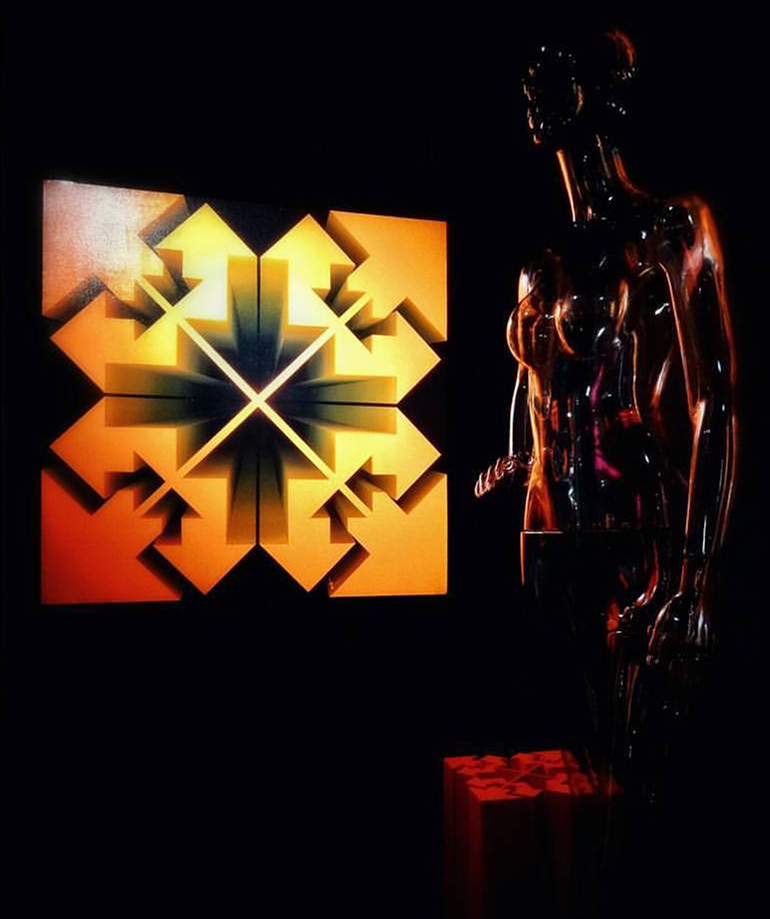 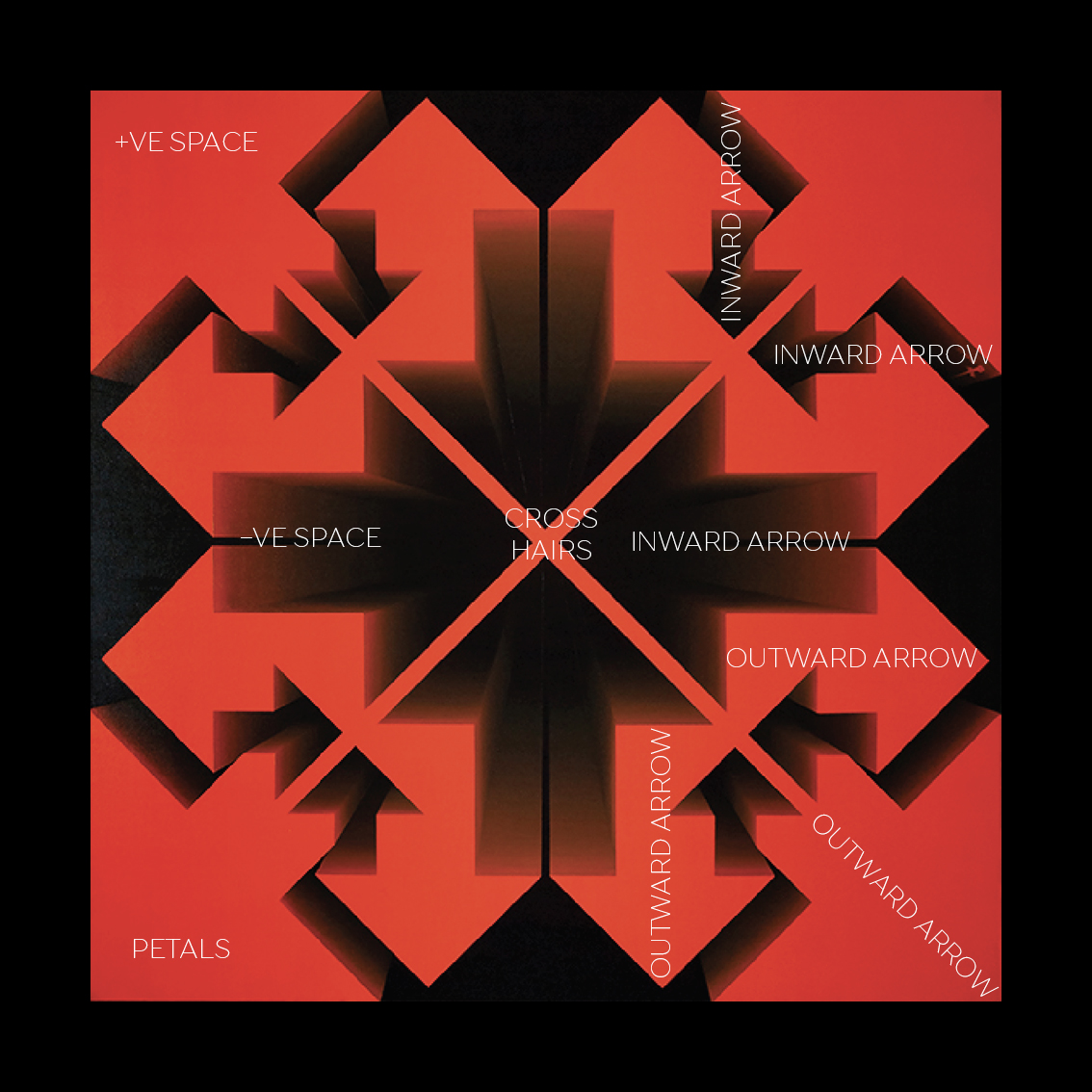 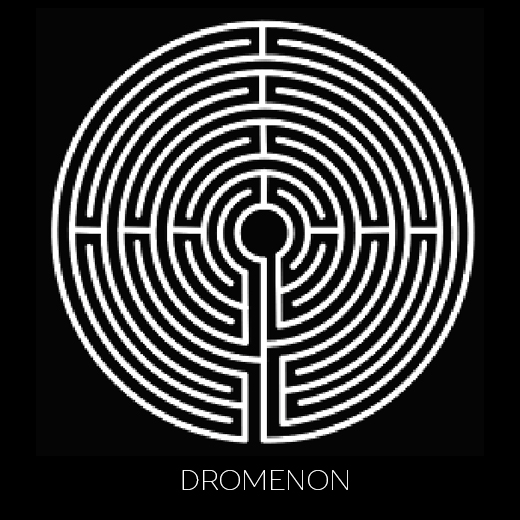